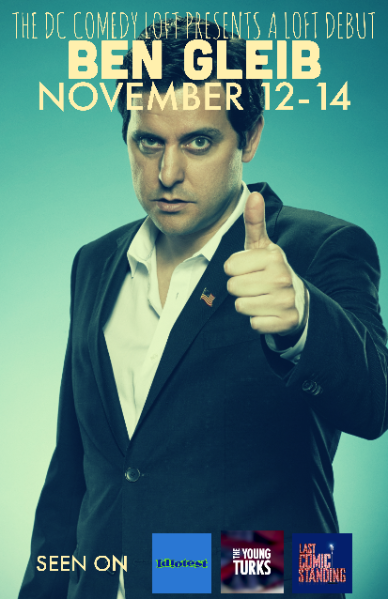 Ben Gleib was named by TBS one of the "funniest comedians working today."

He’s the host, head writer, and executive producer of the Emmy nominated "Idiotest" on NETFLIX. The hit comedy brain teaser game show originally had four seasons and 210 episodes on Game Show Network, and was their most watched original show.

For 7 years he was one of the stars of “Chelsea Lately" on E! with over 100 appearances on the roundtable. He currently can be seen in the “Jay and Silent Bob Reboot” movie, along with Kevin Smith, Jason Mewes, Chris Hemsworth, Rosario Dawson, Ben Affleck and Matt Damon. Recently he pulled a prank on David Beckham for “The Late Late Show with James Corden” which got 27 million views.

His hilarious hour-long standup special "Ben Gleib - Neurotic Gangster" which premiered on SHOWTIME is currently on AMAZON PRIME and is now available for free on YOUTUBE.

Gleib is also the first comedian to ever live stream a full headline set on Facebook Live, and did it in 8 straight cities on his 2016 tour, 100% improvised, getting almost 4 million views. His act is full of unique material, but he's also one of the best at crowd work, improvising with the audience on the spot. (Maybe don’t sit in the front row if his shows.)

His podcast “Last Week on Earth with Ben Gleib” on the Kevin Smith’s Smodcast Network debuted at #9 on iTunes Comedy, and was #1 on Stitcher for over 20 weeks. He comments on “everything” that happened during the last week in news, politics, pop culture, and weird stories, occasionally being joined by celebrity guests like Bryan Cranston, Chris D’elia, Meghan McCain, Bob Odenkirk, Moby, Blake Griffin, Adam Devine, Iliza Shlesinger, Aisha Tyler, Former Supreme Allied Commander and Four-Star General Wesley Clark, political pundits, standup comedians, and his parents. (You can subscribe, rate and review on Apple Podcasts or Spotify.)

He hosted with Olivia Munn the “Telethon for America” powered by Michelle Obama’s ‘When We All Vote’. Gleib also created it, executive produced, and was head writer. It was the first telethon ever with the goal of raising zero dollars. Reinventing the telethon for the digital age, instead the non-partisan telethon took pledges to vote in the 2018 midterms, aiming to create historic voter turnout, which was achieved! It featured celebrities such as Natalie Portman, Charlize Theron, Chelsea Handler, Jane Fonda, Constance Wu, Amy Schumer, Jessica Alba, Judd Apatow, Hasan Minhaj, Adam Devine, Aisha Tyler, Pete Davidson, Ray Romano, Julia Louis Dreyfus, and over 80 others.

Passionate about helping the country, and seeing comedians win elections around the world, he tried to offer voters an out-of-the-box option and just concluded a run for President of the United States in the 2020 election, finishing after almost 8 months in the race, as the 15th highest fundraising active Democratic campaign. During the run he spoke at events alongside the front-runner candidates, campaigned in 13 states and territories including multiple trips to Iowa and New Hampshire, Puerto Rico on the 2-year anniversary of Hurricane Maria, and was arrested protesting corruption at the capitol building in DC. His campaign was covered by NowThis, Larry King, the Des Moines Register and countless others. Videos and information on his campaign can be seen at Gleib2020.com

As an actor he recently guest starred on “American Princess”, an hour dramedy on from Jenji Kohan (Orange is the New Black, GLOW.) He also did a memorable guest star on an episode of the E! scripted series "After Lately” and can currently be seen in the feature film ”Be Like Trees” on YouTube.

He was a regular on "The Today Show" with Kathie Lee and Hoda, with over 25 appearances, and you may have seen one of his appearances on "@Midnight with Chris Hardwick" on Comedy Central, or as a correspondent on ”The Arsenio Hall Show”.

He has toured sold-out arenas all over North America with both Chelsea Handler and Dane Cook, has been headlining comedy clubs around the globe since 2007, and has performed on "The Late Late Show," ”Last Comic Standing," ”Standup and Deliver” and twice on "Last Call with Carson Daly". He is constantly on tour, and is likely performing soon in a town near you.

Esquire once called him one of “Six comedians who could be comedy’s next big thing.” The other five were Aziz Ansari, Patton Oswalt, David Cross, Demetri Martin, and Flight of the Conchords.

Gleib was also guest co-anchor for a week for ABC News digital, from ABC News world headquarters in New York, and did election night 2016 coverage for them. He's been a frequent on-air contributor on CNN, "The Young Turks," and NPR, winning a Golden Mic Award for his work on Southern California NPR "Patt Morrison's Comedy Congress." He created, executive produced, hosted, and was head writer on a spinoff special for GSN called "Political Idiotest," blending his game show with his love of politics. In 2017 he was one of the hosts of social impact news show “ASPIREist” on CNN's Headline News. Unusual gigs for a comedian, and an example of why he is one of the most multi-talented comics in the country. He hosts and produces a monthly political discussion show called “We the People” at the Hollywood Improv which brings together a comedian and a commentator from the left, and one of each from the right, trying to find solutions through humor. The show made its debut at the 2018 Politicon.

An accomplished voice over actor as well, Gleib is one of the stars of Kevin Smith's "Jay and Silent Bob's Super Groovy Cartoon Movie," is the voice of Marshall the Sloth in "Ice Age: Continental Drift," (the #2 animated movie of all-time internationally,) and voices Dali in "The Book of Life" starring Channing Tatum. His voices have also appeared in "Phineas and Ferb," and youtube series "The Melvin Bros."

He hosted "Oscar Roadtrip" which was featured on ABC's Oscars Pre-Show for the 85th Academy Awards and served as host for the Oscars red carpet. He co-wrote and stars in the scripted webseries "CINEDOPES," available for free on Youtube. Gleib is also one of the leads in the feature film "Bad People.” He has also hosted the red carpet for the Grammys, and a football Webseries for Yahoo! Sports called “Behind Enemy Lines”.

In 2007, he starred in the primetime NBC hidden camera comedy series "The Real Wedding Crashers," a show in which he played multiple characters. The show was then also seen on Bravo and Style Network

In 2006, he sold a pilot to FOX called "The Gleib Show" produced by Saturday Night Live's Lorne Michaels, Broadway Video, and NBC Universal. This was based on a show he did for 3 seasons for the National Lampoon Network, and for 4 years before that in college at UC San Diego. It became a class that students could take for 4 units. (This helped several of his friends graduate. Gleib had the privilege of speaking at that graduation, and his show was the subject of his honors thesis. This was lucky because he was not an honor student in any other area. At all.)

He started the brand “Comedy Juice” in 2002 with Scot Richardson, producing the best live comedy shows in the country, in LA at the Hollywood Improv, in New York at Gotham Comedy Club, and many cities in between, consistently booking lineups only of the most famous comedians in the world and giving big breaks to the best up and comers, many of whom became huge stars. They sold the company in 2017 and it continues to be one of the best brands in standup comedy.

Gleib’s online videos have received more than 60 million views, he has worked for all 4 broadcast TV networks, and many of the major cable networks and digital platforms.

In 2008, he shot a pilot where he got to meet and mess with Barack Obama and Bill and Hillary Clinton, and ruined a John McCain press conference, getting kicked out by the Secret Service. You can see those clips here... https://youtu.be/ZwyVmNhTeow

On the radio, he is a regular on the hugely popular shows The Bob and Tom Show, Kevin and Bean, and The Jason Ellis Show and You Up? with Nikki Glaser on Sirius XM.

He is proudest that he is probably better than you at ping pong, and enjoys playing the kazoo, sometimes joining actual musicians on stage. #kazoolife)